Plaids have a perennial charm in keeping men and women interested for years to have it as an essential part of their wardrobe. Plaid is a tartan pattern consisting of crossed horizontal and vertical bands in two or more colours in a woven cloth. The plaid design originated in woven wool clothes but now is made into all forms of materials.

Plaids have always been associated with Scotland because of the Scottish kilts worn by men in the 19th century and even now, during Scotland’s national festivals. The word ‘Tartan’ is derived from the French word tiretain which refers to a woven cloth. Tartan is often called as Plaid in North America; however, in Scotland plaid is a tartan cloth slung over the shoulder as a kilt accessory, or a plain ordinary blanket.

Until the middle of the 19th century, highland tartans were only associated with regional places as the tartan designs were produced by the local weavers using natural dyes mainly for the local people.

As the tartan pattern entered the American market, it became to be known as ‘plaid’, which originated as the Buffalo plaid. The Buffalo plaid was the red and black checkered pattern that was notably seen as an outfit for lumber jacks.

Princes Diana was one of the style icons in the 1980s and her sense of style and elegance also included some of the plaid patterns that became a part of every women’s dream. Michelle Dockery and Gwen Stefani also flaunted their versions of plaid that made less seem more. 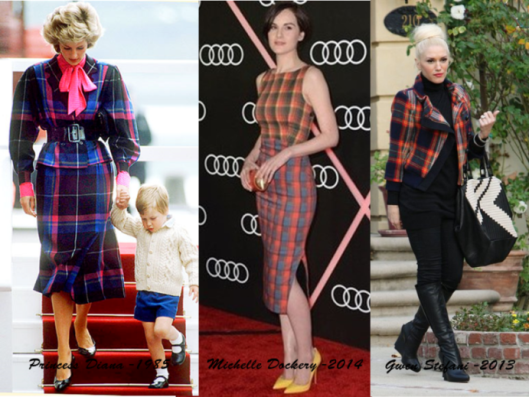 Various interpretations of the regular plaid patterns were recently being used by fashion designers for the spring/summer ready to wear 2015 collection. While Creatures of the Wind and Emanuel Ungaro decided to go simple combining the plaid pattern with trousers and flowy skirts and crop tops, Bottega Veneta, on the other hand, gave plaid an unfinished and worn-in look.

Diane von Furstenberg’s interpretation of the plaids had a charm that comprised of a woman’s appeal combined with her beauty whereas Tsumori Chisato presented an extraordinaire mishmash of colour and checks in varied forms that make us stop, stare and wonder. A more sophisticated and formal way was procured by Altuzarra in his checkered patterns, making it a new office wear trend.

The origin of the plaid pattern is unknown even now, but its influence is visible all over even in today’s fashion world. Fashion designers keep finding different ways to combine a simple pattern with their flair and inspiration in every show and keep us intrigued and eager about what will be seen next.

Don’t forget to get inspired from our other blogs on Trend alert 2015 – Pocket dresses , High Slit Skirts and Classic polo look .

Supriya Ghurye is the founder and owner of Fuel4Fashion, the virtual design studio for apparels and surface patterns that caters to new and upcoming fashion design labels with a diverse portfolio of design services. She is a member of the Cherie Blair Foundation’s Women Entrepreneurship Program and has over a decade of fashion industry experience with international labels and start-ups.