The respected other half of our population have been suffering a slope in their fashion fiesta earlier but from last ten years or so, they are giving the female designers a run for their money. Male magazines globally has declared that it is now in the competition with Elle’s announcement of its men magazine. Then it quite justifiably became the talk of the town. On its November’s issue Elle’s Men Hong Kong featured a very pretty Asian boy Aarif Rehman. Magazines are thus hiring global faces to connect people from different places so that the brand can have global supporters. Not just Elle, many other big brands are trying to give their much ignored male audience a chance to spend their money over the Men’s changed looks. Fashion industry is trying to fit-in the wallet of guys, among the big spenders like fancy watches, tux’s and Porsche.

Big designers like Dolce and Gabbana has dug deep and innovated designers for Men’s changed looks. In 2007 D&G they showcased their marvelous outfits and then decided to throw some colors in there.

Speaking of colors, D&G also gave some bright shimmer to the staple black to give a finer tune to Men’s changed looks.

New designs and male faces on the cover like David Beckham on Elle’s in 2012 are showing the somewhat sexist persona of the brand’s to gain on what has been much under neglect in Men’s changed looks.

Some people will argue that men are not that interested in fashion as their female counterparts are. But Men’s changed looks in the recent generation comprehends the increase in media speculation over  small or big beards, black tie with grey suits or brown shoes with black pants. I think it’s safer to say that the subtlety seen once in the male gender is now gone for good, what do you think? 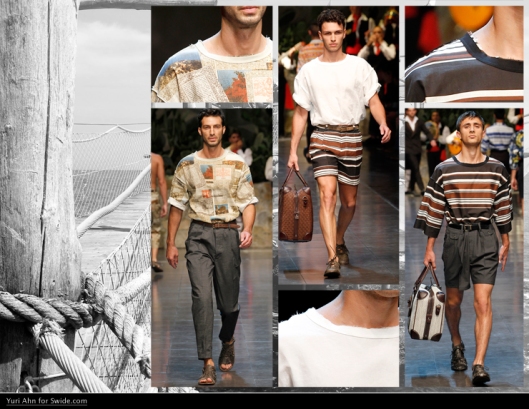 What is your opinion about the changed look of men over the decade? Sound-off in the comments section and let me know.