Africa is one of those places that are still well known for their various tribes that are present in the continent. Just like India, Africa has also become an inspiration for designers to come up with new designs, styles and prints that symbolize these tribes.

According to history, the early African clothing was pieced together from art, oral histories and traditions that are still practiced by the present day tribal members. Men usually didn’t wear any clothing and instead chose to decorate their bodies with paints or scars. When they did wear, it mostly consisted of animal skins and bark clothes.

Women on the other hand, are dressed according to their marital status. Women wear clothes made out of beads if they were unmarried to reveal their status, while the married women cover themselves completely.

The animal skin and bark cloth was worn in different way by every tribe. While some draped it, others stitched it on the sides. After the weaving techniques were developed, Raffin, the fiber of a palm plant, and cotton became the most commonly used materials.

There are various designers who have used the African tribes as their inspiration for various collections. Stella Jean being one of them has many collections that have been based on the tribal theme, each collection with their own unique silhouettes and drapes that describe the eccentric designer perfectly. 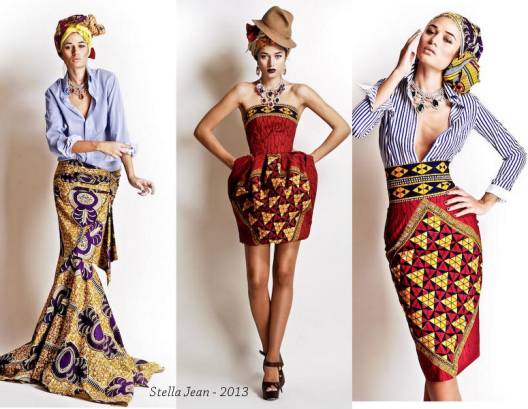 Donna Karen presented her interpretation of the tribal print with clean cut beige and black tones that depict the subtle side of tribal prints used in Africa, while Mara Hoffman and Jenny Kee present their style in an explosion of colors combined with minimalist and extravagant usage of accessories respectively.

To find inspiration, designers have been exploring the ends of the Earth and beyond. They keep exploring continents to discover new cultures and traditions that were unknown off previously, to provide us with something new and exciting every fashion season.

Supriya Ghurye is the founder and owner of Fuel4Fashion, the first virtual design studio that caters to new and upcoming fashion design labels with a diverse portfolio of design services. She is a member of the Cherie Blair Foundation’s Women Entrepreneurship Program and has over a decade of fashion industry experience with international labels and start-ups.

As all the fashion weeks come to an end, they leave behind the various trends for us to watch out for in the coming year. One of the popular trends this year was the high slit skirt. High slit skirts have been a part of an on and off trend that appears every year in different forms to dazzle us.

High slit skirts have become a part of fashion that every woman adores in her wardrobe to show off her feminine side that she contrasts with her professional self.

Amber Heard and Michael Kors collaborated to make this outfit the perfect combination of sophistication and sexiness. Many women were inspired to try the new emerging trend, which was followed by the boom of cotton blend maxi slit skirts on e-commerce sites like Ebay. For the spring 2012 collection, Peter Som predicted an upcoming trend by giving it his own flare of prints that were also a part of the collection. 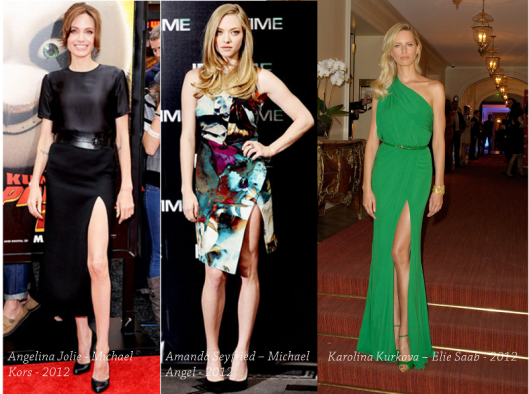 Angelina Jolie displayed her elegance and classiness with this plain black slit dress that fitted perfectly to her slender bodice, while Amanda Seyfried contrasted the classics with a psychedelic print texture that suited her perfectly. Karolina Kurkova wore this number that is a signature style of Elie Saab’s femininity and drapes that are prepared for the woman wearing it.

The high slit trend was also present in many of the Spring/Summer 2015 Ready-To-Wear collections in various forms and styles that showcased the designer’s inspiration. Diane von Furstenberg presented her inspiration in the form of flowing checks, while Altewai Saome and Jay Godfrey presented a more chic style. 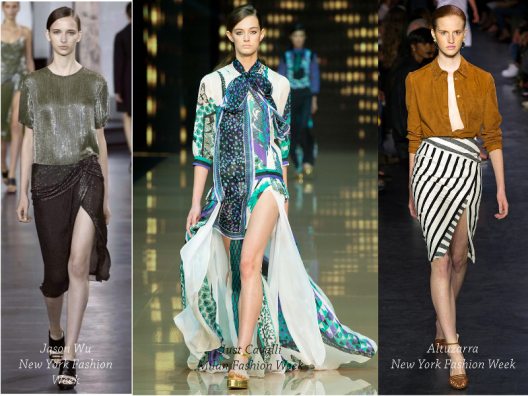 Jason Wu took the path of metallic shades and showcased a very humble outfit while on the other hand, Just Cavalli made a patchwork art of the flowing fabrics. Stripes’ being one of the other trends was a popular choice for the designers and Altuzarra presented his creativeness by combining it with an off mustard shade that changed the look of the entire outfit.

This trend inspires the designers to present their audience with a way to flaunt their femininity and sensuality with a simple look. The high slit skirts and dresses would become a part of every woman’s wardrobe to parade their style through the numerous choices that the trend is going to offer.

Don’t forget to get inspired from our other blogs on Trend alert 2015 – Plaids, Pocket dresses and Classic polo look .

Supriya Ghurye is the founder and owner of Fuel4Fashion, the virtual design studio that caters to new and upcoming fashion design labels with a diverse portfolio of design services. She is a member of the Cherie Blair Foundation’s Women Entrepreneurship Program and has over a decade of fashion industry experience.

Born in Santo Domingo in the year of 1932, the fashion world gained a precious gem for its collection, named Oscar de le Renta. He was trained by Cristobal Balenciaga and Antonio del Castillo and worked for Lanvin and Balmain before finally opening his own brand.

Oscar de la Renta became internationally known as one of the couturier who dressed Jacqueline Kennedy and even today, his fashion house continues to dress from film stars to royalty.

Oscar de la Renta’s 2015 spring/summer ready-to-wear 2015 collection was a complete representation of what Oscar de la Renta stands for. It comprised of feminism, elegance, beauty, seduction, sophistication, ambition, everything that a woman wanted herself to be. Oscar de la Renta captured this essence in each of his garments. As the Oscar de la Renta era ends, we decided to pick out some of his signature designs and pay a tribute to the most adored designer of all times.

Cameron Diaz flaunted this gold-dusted gown in the Oscars of 2010. The exquisite detailing and the flow of the fabric draped around her felt like it was a part of her. Oscar de la Renta knew exactly how to flourish the features of Diaz on this occasion. 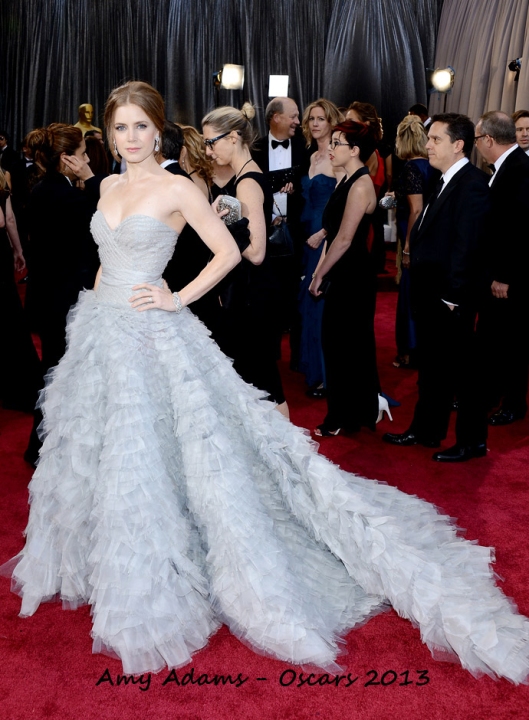 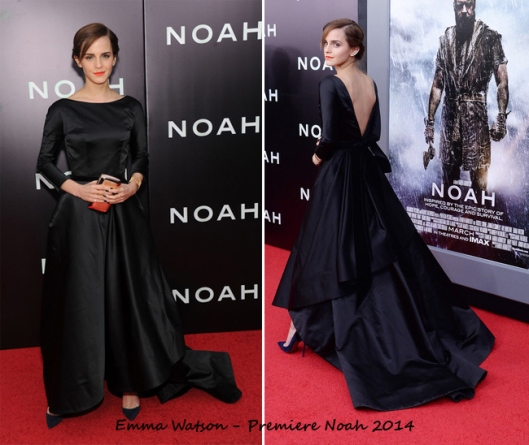 For the premiere of her upcoming movie Noah, Emma Watson carried of Oscar de la Renta’s autumn/winter 2014 collection for jaw-dropping effects. The elegant front and the daring low back combination worked well to represent the ambitious feminine women of today’s era.

For the Vogue shoot 2014 featuring Beyonce, Oscar de la Renta formed this speechless design that would make any women pause and admire the perfection this dress. The waviness of the fabric and layering combined with its colour created an unnatural spell for every woman. 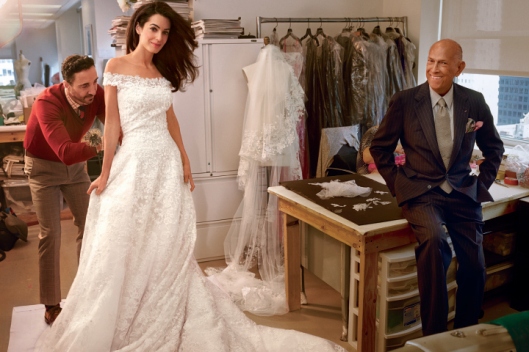 The last on our list is the wedding gown of Amal Alamuddin which took place in September 2014 and was exclusively featured in Vogue. The off-shoulder laced gown represented the traditional pattern while also being one of the absolutely stunning designs of the year.

Oscar de la Renta is the name every woman depended on to make them feel beautiful. He fulfilled the dreams and made wishes come true for women all over the world.

Fashion and Halloween have been inspiring each other for decades, and every time the result is exquisite. Halloween brings the designers a new inspiration and makes them explore their Gothic side.

Here are our picks for the Halloween inspired fashion outfits:

The lady with the crazy sense of style made a statement with Lady GaGa’s meat dress, in the MTV Video Music Awards by wearing a dress and shoes made entirely of meat. There were many interpretations as to the significance of the dress, the most popular being, Lady Gaga not being a piece of meat.

Tim Burton’s Magical Fashion shoot has the perfect combination of Halloween and his magical imagination. The shoot comprised of various designers and brands that produced inspiring designs on the theme that gave us a peep to the wild interpretations that can be constructed.

In the fall of 2009, John Galliano found inspiration for his Ready-to-wear collection in the witches of the past. The make-up may say Witches of the past, but the attire is truly a Galliano interpretation that makes us look at the design in admiration. 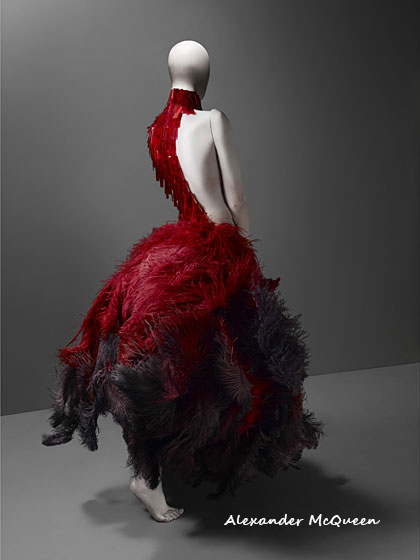 Halloween is empty without Alexander McQueen being a part of it. The designer is known was his elaborate and unconventional designs that inspire others to follow and research his style. The outfit describes the feel of Halloween and Goth in a “bloody” way that can only be done by McQueen. 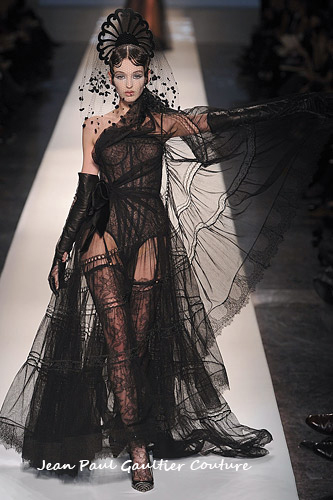 Jean Paul Gaultier in the spring of 2009 presented his outfit of the Halloween Goth bride on the ramp. Nothing represents the Gothic culture and Halloween like the colour black and with that the Goths’s unconventional philosophy of wearing a black bridal dress on their wedding day.

There are many more outfits that resemble the spirit of Halloween and all its aspects in ways that sometimes seems unimaginable to the mind, but the designers keep on exciting us with their eccentric ways.